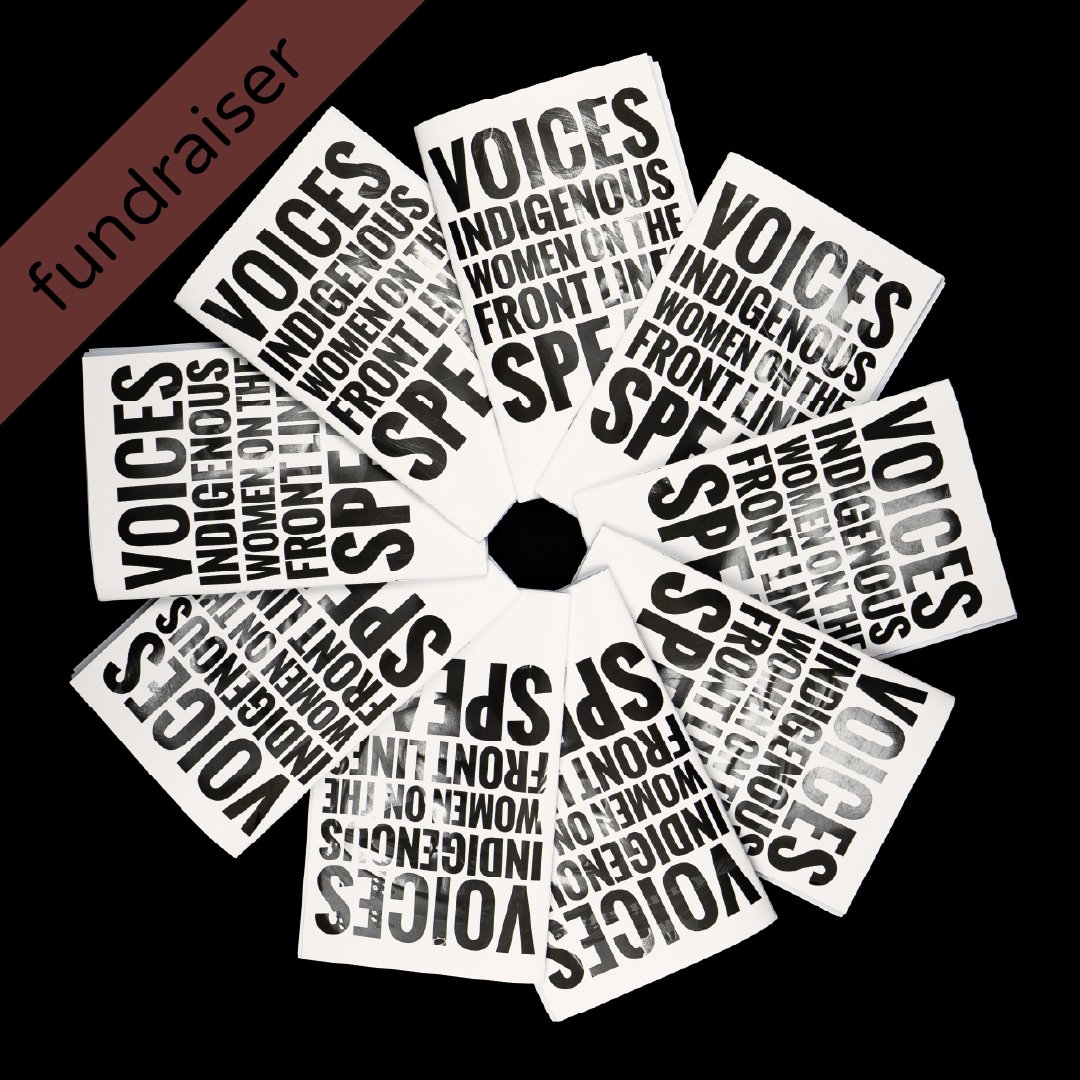 Voices: Indigenous women on the front lines speak
by beyon and wulf

Voices grew out of a 7-month journey spent interviewing and working alongside Women and 2Spirit Water Protectors and Land Defenders. This included joining femmes patrolling the coastal waters of the Tsimshian, land defenders blockading a mine on Secwepemc territory and in solidarity with the Ahousaht Four, and joining the demos that shut down the DFO office. In between they processed wild foods with elders, minded children, washed a lot of dishes, and taught the first Indigenous Youth Art Camp on the Unist’ot’en Yintah.

The result is nine zines, each containing a long-form interview with one of nine different Women and 2Spirit Indigenous land defenders:

Helen Knott: Volume I
A Dana Zaa and Nehiyaw poet and mother who was central to the occupation of her traditional terrritories in 2016 to protect the Peace River, Sahghii Nachii, from the destructive Site C Dam.

Koot-Ges: Volume 2
Raised on the seas, Koot-Ges is a Nisga'a, Tsimshian, and Haida fisherwoman who in 2015 began the occupation of Lac U'u'la with her children and a handful of women water protectors.

Christine Jack: Volume 3
A 2Spirit St'at'imc spiritual leader who is living as a caretaker of Ulluilsc to prepare the way for the Ucwalmicw to return to their ancestral village and protect the land from clearcut logging.

Christie Brown: Volume 4
A woman of the Skeena River and born of Gitxsan and Scottish ancestry, she was one of the founding women in the re-occupation to protect Lax U'u'la from the destruction of NLG.

Destiny Michell: Volume 6
Future Hereditary Chief and ally to 2Spirit, Queer, and Trans Youth, Destiny Michell protects her Yintah from the threat of pipelines while encouraging youth in her community to connect with their territories.

Freda Huson: Volume 7
A spokeswoman for the Unist'ot'en clan, Freda Huson began living traditionally on her family's Yintah, Talbits Kwah, in 2009, to stop multiple pipelines and protect the sovereignty of her people., elder, and teacher who, for 30 years,

Dorris Rosso: Volume 8
An Unist'ot'en Hereditary Chief, Elder, and Teacher who, for 30 years, has dedicated her life to protecting the Wet'suwet'en language and the unceded Yintahs of Talbits Kwah and Poplar Lake.

Molly Wickham: Volume 9
Spookw house of the Gitxsan and Cas Yikh house of the Gidimt'en Clan, Molly coordinates the Life School and is a traditional performer, living and raising her family on their territory Lhudis Bin, protecting it from Nanika Mines.

**100% of profits from these zines goes to the work of the land defenders and water protectors interviewed in these zines. For more information please visit the Voices project website: www.voicesfrontlines.com

0
Your bag is empty
Start shopping